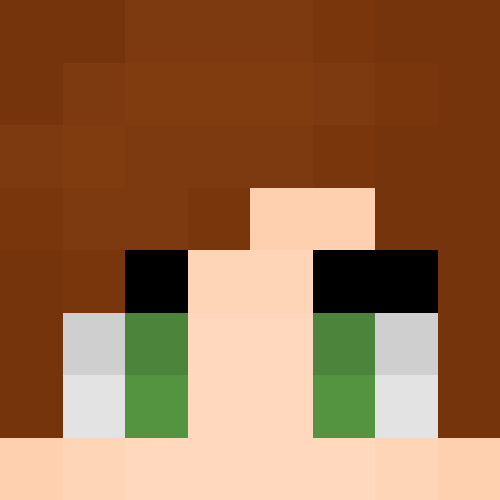 1byte Member
There are no wall posts here yet.
Registered:over 2 years ago
Last Seen:about 1 year ago
Profile Views:732

This user has not added any about fields yet.
No friends.
Latest Posts:

Nice to meet you Itsyaboi :) Looking forward to getting to know you more on the server. I may have to look to you for help in the future as I plan to learn Java (currently doing Python!)

The introduction of Itsyaboi66 over 2 years ago

I'd like to preface my application by just saying that I had decided to quit gaming altogether over a year ago in an attempt to improve my life, however have realised that it infact did the opposite of what I intended it to. I haven't played Minecraft for a very long time, however, despite the over 10 year old awful laptop I have borrowed from my school for 'work', I have found playing with you guys immense fun and it has brought so much happiness to me in this awfully lonely time, and I am so greatful for that. I'm applying because I'd like to help keep that the case for others. It's my attempt at giving back to the community that has helped me. Thank you so much for everything!

What is your in-game username, and nickname? 1byte / Manu (my actual name, which is short for Emmanuel!)

What position are you applying for? Helper

What server are you applying to be T-Helper on? While I'm most active on Retronix, I am happy to staff both that & Skyblock (I am also very interested in being involved in the staffing of the upcoming server, wink face)

What timezone do you live and/or work in? I am currently in BST (British 'Summer' Time) or GMT+1, mind you, it's not very sunny outside, after all I live in the UK!

Can you use Discord? I've used Discord for over 4 years, and as well as moderating various servers, I also own my own - suffice to say I can use it comfortably.

How much money have you donated to the server? Personally, I have only donated $1.50 for discounted silk-spawner permissions, however my sheer stubbornness to achieve /baltop without an 'advantage' prompted a $5 fly purchase for my account from Jaden (grrrr!)

How long have you been on NRG? While I have only known of and played on the server for a week or so, I am very familiar with much of it's community from previous servers I've played on, and in this time I have amassed a close to 3 day playtime (aided by quarantine). I have familiarised myself with players previously unknown to me and have made many new friends.

How often are you online NRG? Currently, most of, if not all, of my time is spent on NRG due to obvious reasons. Once this chaos we are living in passes, I will still likely be able to remain active on a mostly daily basis, decided by the work load I receive from my education.

Have you ever been jailed, muted, or banned? If so, why? I I have not.

What reasons do you have for applying to become a staff member? I take genuine enjoyment in bringing happiness to people, whether it be through resolving any issues players may face on the server, or just providing an outlet for them to talk to. For the forseeable future, I will be able to be incredibly active on the server, and I feel being a staff member will enable me to be able to bring this happiness to people with ease using the means available to me as a helper. I am fully able to have a joke and be playful with friends, but can be serious as soon as it it needed. I also find myself able to perceive people's intentions in interactions, which I find a useful skill in identifying negative/troublesome people.

What can you contribute to the team as a staff member that you cannot as a player? Having access to CoreProtect and it's various commands will make helping players far easier with issues that usually would not possible for such as returning items that have been lost due to non-player errors. I also feel that generally, simply having the standout prefix of [Helper] makes it easier for players to see and trust me, as well providing the authority in situations in which I am aware of how users should be behaving, where they are not. I am also fairly active in chat and so the constant presence of an active staff member will do bundles of good to how players behave on the server and ultimately whether newer members will judge to stay on the server.

Do you get along with all players and staff, if not - why? I have found it a pleasure to reacquaint myself with old friends as well as make new ones, and so far I have gotten along well with all players and staff, and I hope that stays the case in the future. I have NRG to have an incredibly kind, generous and friendly community, values which I greatly admire in people, which has made getting along with everyone an act of ease.

Have you ever held (or currently are) a staff position on another server? I have held various positions in staff teams on multiple servers over the many years I've played Minecraft which have helped mould me as a person and advance me as a person. I do not currently hold a position which gives me the ability to spend all my free time on NRG.

What do you think "being staff" means? I believe being a staff member is being an integral part of the community that helps keep everyone happy, making the server a safe and enjoyable place to be while upholding the rules. It's being a friend to all, even in difficult situations - being able to keep your cool when your patience may be stretched.

*Do you work or attend school? What times? I currently attend secondary school in the UK. I wake up at 6.00am, start school at 8.45am and return home around/just before 5.00pm.

*How long have you been playing Minecraft? I first played Minecraft on an older friend's computer during 2011 around its release, was hooked eventually bought my first account in 2012 - therefore I have been playing for 9 years. I've never lost my love for the game.